Jesus said, “There will be signs in the sun, the moon, and the stars, and on the earth distress among nations confused by the roaring of the sea and the waves. People will faint from fear and foreboding of what is coming upon the world, for the powers of the heavens will be shaken. Then they will see ‘the Son of Man coming in a cloud’ with power and great glory. Now when these things begin to take place, stand up and raise your heads, because your redemption is drawing near.”

Then he told them a parable: “Look at the fig tree and all the trees; as soon as they sprout leaves you can see for yourselves and know that summer is already near. So also, when you see these things taking place, you know that the kingdom of God is near. Truly I tell you, this generation will not pass away until all things have taken place. Heaven and earth will pass away, but my words will not pass away.

“Be on guard so that your hearts are not weighed down with dissipation and drunkenness and the worries of this life, and that day catch you unexpectedly, like a trap. For it will come upon all who live on the face of the whole earth. Be alert at all times, praying that you may have the strength to escape all these things that will take place, and to stand before the Son of Man.”

What Makes a King Powerful?

Pilate entered the headquarters again, summoned Jesus, and asked him, “Are you the King of the Jews?” Jesus answered, “Do you ask this on your own, or did others tell you about me?” Pilate replied, “I am not a Jew, am I? Your own nation and the chief priests have handed you over to me. What have you done?” Jesus answered, “My kingdom is not from this world. If my kingdom were from this world, my followers would be fighting to keep me from being handed over to the Jews. But as it is, my kingdom is not from here.” Pilate asked him, “So you are a king?” Jesus answered, “You say that I am a king. For this I was born, and for this I came into the world, to testify to the truth. Everyone who belongs to the truth listens to my voice.”

Who are You Going to Provoke?

As Jesus came out of the temple, one of his disciples said to him, “Look, Teacher, what large stones and what large buildings!” Then Jesus asked him, “Do you see these great buildings? Not one stone will be left here upon another; all will be thrown down.”

When he was sitting on the Mount of Olives opposite the temple, Peter, James, John, and Andrew asked him privately, “Tell us, when will this be, and what will be the sign that all these things are about to be accomplished?” Then Jesus began to say to them, “Beware that no one leads you astray. Many will come in my name and say, `I am he!’ and they will lead many astray. When you hear of wars and rumors of wars, do not be alarmed; this must take place, but the end is still to come. For nation will rise against nation, and kingdom against kingdom; there will be earthquakes in various places; there will be famines. This is but the beginning of the birthpangs.”

Teaching in the temple, Jesus said, “Beware of the scribes, who like to walk around in long robes, and to be greeted with respect in the marketplaces, and to have the best seats in the synagogues and places of honor at banquets! They devour widows’ houses and for the sake of appearance say long prayers. They will receive the greater condemnation.”

He sat down opposite the treasury, and watched the crowd putting money into the treasury. Many rich people put in large sums. A poor widow came and put in two small copper coins, which are worth a penny. Then he called his disciples and said to them, “Truly I tell you, this poor widow has put in more than all those who are contributing to the treasury. For all of them have contributed out of their abundance; but she out of her poverty has put in everything she had, all she had to live on.”

Do You See God in Their Eyes?

When Mary came where Jesus was and saw him, she knelt at his feet and said to him, “Lord, if you had been here, my brother would not have died.” When Jesus saw her weeping, and the Jews who came with her also weeping, he was greatly disturbed in spirit and deeply moved. He said, “Where have you laid him?” They said to him, “Lord, come and see.” Jesus began to weep. So the Jews said, “See how he loved him!” But some of them said, “Could not he who opened the eyes of the blind man have kept this man from dying?”

Then Jesus, again greatly disturbed, came to the tomb. It was a cave, and a stone was lying against it. Jesus said, “Take away the stone.” Martha, the sister of the dead man, said to him, “Lord, already there is a stench because he has been dead four days.” Jesus said to her, “Did I not tell you that if you believed, you would see the glory of God?” So they took away the stone. And Jesus looked upward and said, “Father, I thank you for having heard me. I knew that you always hear me, but I have said this for the sake of the crowd standing here, so that they may believe that you sent me.” When he had said this, he cried with a loud voice, “Lazarus, come out!” The dead man came out, his hands and feet bound with strips of cloth, and his face wrapped in a cloth. Jesus said to them, “Unbind him, and let him go.”

Check out the November newsletter from St. Bart’s! 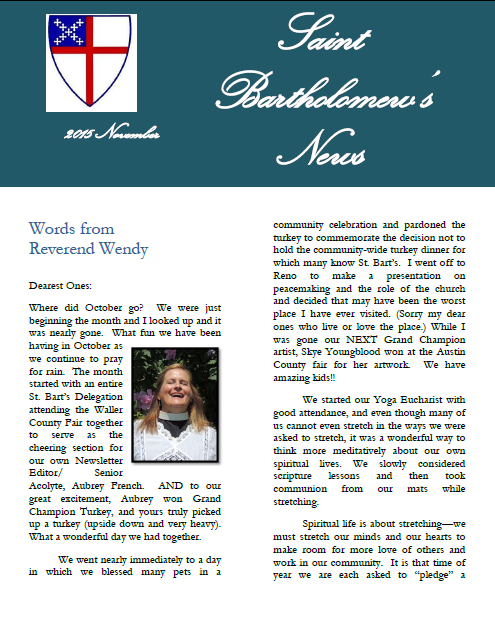